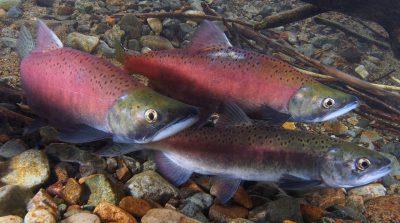 Chum, also known as “dog” salmon from the large canine teeth of spawning males, are the second largest Pacific salmon, weighing up to 40 pounds. Spawning males develop reddish vertical bars on their flanks; females have a reddish lateral band. Although chum are fast swimmers, they are not good jumpers, and they do not migrate far inland to spawn.

Chum fry migrate to the sea soon after they emerge from the gravel. They spend up to seven years at sea, but four years is typical.

Pink salmon rarely travel far upriver to spawn; they are typically found in shorter coastal streams. When the fry emerge from the gravel, they already have the silvery color of smolts, and they migrate directly to sea. Pinks spend a fixed 18 months at sea; thus, all returning pink salmon were born in the same year, and different year classes do not interbreed.

Pinks average 2 to 5 pounds. Sea run pinks are easily distinguished by the large oval spots on their backs and tail fins. Spawning males develop a large hump on their backs, earning the species its other name, “humpback.” Some biologists think the males’ conspicuous hump diverts the attention of predators away from the females.

Sockeye fry, after emerging from the gravel, migrate to freshwater lakes, where they spend 1 to 2 years before heading out to sea. Some populations, called kokanee, spend their entire lives in freshwater lakes.

Coho (or silver) salmon are powerfully built, and they can jump falls that most salmon cannot negotiate. They have small black spots on their backs and the upper lobe of the tail fin. The gums at the base of the teeth are white. Although sea run coho have silver sides, spawning males develop bright red sides and greenish backs. Spawning females are paler. The jaws of spawning males often become grotesquely hooked.

Most coho spend 18 months at sea, staying in coastal waters, and they return to their home streams as 3 year olds weighing 8 to 10 pounds. The fry spend more than a year living in streams.

The Chinook (or king) is the largest salmon species, averaging 18 to 24 pounds with up to 127 pounds recorded. Chinook have small black spots on the back, dorsal fin, and tail fin. The gums at the base of the teeth are gray. Fall run Chinook are robust and deep bodied, while spring chinook are smaller, slimmer, and not as brightly colored when spawning.

Fall Chinook spawn soon after arriving at their spawning grounds, usually large rivers. The fry spend 3 to 4 months in fresh water. Spring chinook migrate earlier, but delay spawning until fall, and they spawn in smaller tributaries. Their fry spend a year or more in fresh water. The Sacramento River hosts a unique winter run chinook, which is now listed as endangered.

What You Will See at the Hatchery

Tours of the Hatchery

Safety at the Hatchery

History of the Hatchery