Issaquah hatchery staff and FISH volunteers harvested about 258,000 eggs during the first coho spawning of the 2020 season on Tuesday, Oct. 27. Eggs and milt were collected from 119 spawning pairs. The egg take represents about one quarter of the hatchery goal of 1 million eggs for the season. With a healthy return of fish so far this year, the hatchery was also able to release 419 coho upstream of the hatchery to continue farther up Issaquah Creek and spawn naturally. In addition, three late-arrival chinook were released upstream, and one rainbow trout that followed the salmon into the hatchery holding pond was returned to the wild as well. Coho spawning will continue for the next two to three weeks.

Almost 2,500 kokanee fry bid a fond farewell to the Issaquah Salmon Hatchery on Oct. 26 as they started their new journey to Lake Sammamish. The lake’s threatened kokanee population, whose numbers have dwindled to just a few hundred in recent years, will get a boost from this new batch of fry which were incubated and raised at the Issaquah hatchery from eggs collected in late 2019.

The hatchery rearing program is part of the recovery efforts of the Kokanee Work Group, an alliance of federal, state, county and local agencies, tribes and non-profit organizations dedicated to ensuring the survival of Lake Sammamish’s “little red fish.” The effort has conducted annual fry release programs, including educational components for local students, for the last 10 years to raise awareness about the plight of these native fish, threatened by environmental challenges due to urbanization. This year, with the hatchery closed and students attending virtual classes, a public celebration was not possible.

In the past, fry were released at very early stages of development, when they were only about one inch long. In this second year, the hatchery retained and fed the fry for a longer period, until they reached 5-6 inches in length, continuing an experiment to determine if larger size, and cooler waters, help to prevent predation by other fish in the lake that may be depleting the population.

Officials from the Washington Department of Fish and Wildlife and the King County Department of Natural Resources used buckets to transport the squirming kokanee fry from the hatchery incubation building into a waiting truck outfitted with a large covered tub of water. The eggs were collected from fish in Lewis Creek, at the south end of Lake Sammamish, so their progeny were transported back to Lewis Creek for release, and they were expected to migrate quickly to Lake Sammamish. There, they will grow and mature before returning to the stream to spawn at 3 or 4 years old. Bon voyage, little kokanee!

The 2020 chinook spawning season is drawing to a close, and we’ve seen a lot of fish spawning in Issaquah Creek! The hatchery concluded the chinook spawning season on Oct. 13 with the fourth weekly egg take of the run. Hatchery staff and volunteers, all wearing masks, socially distanced, spawned a season total of 881 chinook hens and bucks, and collected 1.8 million eggs. Disappointingly, this number fell short of our goal of 3.2 million, so the Soos Creek Hatchery has provided 1.5 million extra chinook eggs to the Issaquah Hatchery for a total of 3.3 million eggs.

For the season, our hatchery saw roughly 2,348 chinook (35 natural origin) jump up the fish ladder and into the holding ponds. For the Greater Lake Washington Watershed, more than 12,000 chinook were counted entering the fresh water at the Ballard Locks. Some of those salmon headed to other streams to spawn, and many spawned downstream of the hatchery in Issaquah Creek. 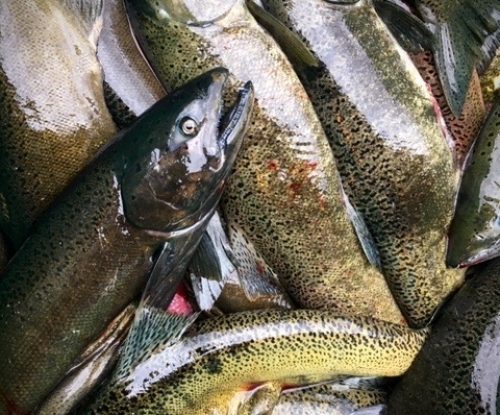 Chinook hens at the hatchery, their mission accomplished.

933
Gorgeous grouping under the bridge.

1280
Chinook at the pond, ready to spawn

515
Volunteer Larry handling Chinook for spawning at the pond

1280
Looking for the last few chinook among coho.

1280
Looking for the last few chinook among coho.

Due to our warm, dry weather this fall, it was feared that a number of the chinook would not make it back to their spawning grounds. Those that did arrive were overwhelmingly male: about 75 percent, as the females are preferred by predators such as seals, sea lions and orcas.

Although the number of fish arriving at the hatchery this year was fewer than average, the hatchery released 51 chinook upstream above the weir to spawn in the upper reaches of Issaquah Creek. These were fish that were not ripe by the final spawning day at the hatchery.

The good news is that the weekend rains brought lots of coho upstream! At least 1,200 are currently trapped in the holding pond as of this writing. Coho spawning is expected to start in late October and continue through mid-November. Let’s route for big numbers this year!

Oct. 9, 2020: Hatchery staff and volunteers have been spawning our chinook salmon since Sept. 22. After the third spawn, the hatchery has collected just 1.7 million eggs. This year’s goal is 3.3 million eggs, so this may be difficult to achieve.

While the chinook run is bigger than average this year, the vast majority of fish returning to the hatchery are males. The reason for the lopsided return is unknown, but we do know that predators generally prefer to feed on females with their tasty and nutritious eggs. WDFE staff will be picking up chinook eggs Tuesday, October 13 from the Soos Creek Hatchery to supplement our harvest and reach our goal for egg production — as they did last year as well.

Meanwhile, Issaquah Creek is full of spawning chinook below the hatchery, and coho are starting to return as well — although they won’t start spawning until later in October. We have also seen four sockeye in the creek so far.

The unseasonably warm and dry weather this fall has kept fish in Lake Sammamish for the last couple of weeks as they wait for rain to migrate upstream. The next storm should bring an influx of new fish to the hatchery.

Deterring Seal Predation at the Locks

Spawning salmon returning from the ocean to the Greater Lake Washington Watershed and our own Issaquah Creek are getting a helping hand to get past predators at the Ballard Locks. That is where many Issaquah chinook and coho – squeezed into a small space to navigate the fish ladder into fresh water – are getting waylaid and devoured by hungry harbor seals.

And it is not just the adult salmon that become dinner for seals. Smolts migrating from the Issaquah Salmon Hatchery out to the ocean spend several months just below the locks as they adapt to saltwater, and many become snacks for the resident harbor seals. The U.S. Army Corps of Engineers, in partnership with non-profits and tribes, is experimenting with a new noise-making technology that will deter salmon-fishing by seals and potentially improve the salmon survival rates.

According to the Seattle Times:

A new gadget is being tested at the locks, intended to startle seals to deter them. The so-called Targeted Acoustic Startle Technology, developed by scientists from the Sea Mammal Research Unit at the University of St. Andrews, is marketed by GenusWave Ltd. based in Edinburgh, Scotland. The device was made for use at fish farms, to keep seals away from net pens. The device is housed in a metal canister that looks like an upscale water bottle, and produces a sound played through two underwater speakers at randomized intervals. The sound it makes is not particularly loud or unpleasant … to a person. The acoustic technology replaces conventional, loud noisemakers that seals just get used to. The sound made by the startle device provokes a flight response — a fundamental mammalian reflex — without causing harm to the seal, or bothering salmon.”